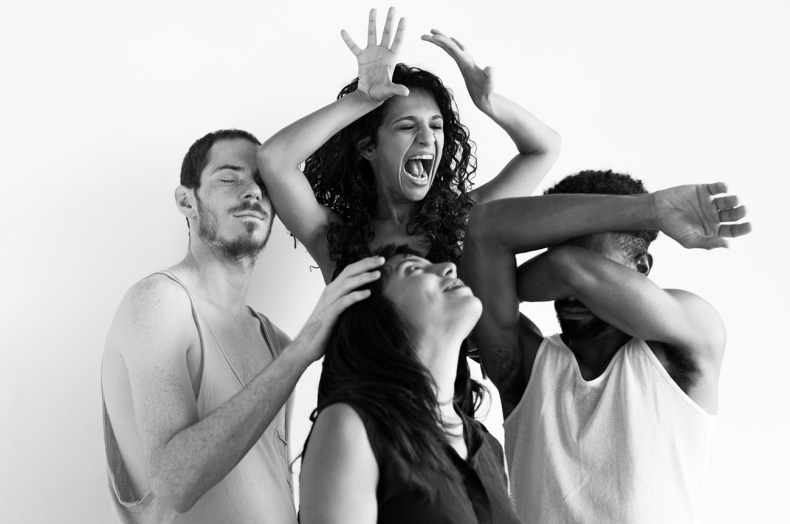 Visual stimulants often dominate productions. But what happens when you have to rely on your sense of hearing and touch? Upon the invitation of the Kaaitheater and European partners Wiener Tanzwochen, CN D (Paris) and The Place (London), Vera Tussing and Anne Juren create work that can be experienced by people who can see, but also by those who are blind or visually impaired. A preference for touch over sight, for the close over the distant. We will provide audio description for Volmir Cordeiro’s dance production: a dance professional will describe live what is happening onstage. Mette Edvardsen speaks from within the audience, addressing an empty stage, and thus allows you to create your mental images.

After a series of solos, Volmir Cordeiro has created his first work for four dancers. In L’œil la bouche et le reste, he invites you to change your perspective on sight. He starts with the eye and then extends his exploration to all spherical things: the sun, an egg, the moon, an arena. He has created a dance that aims to express the physical movement and behaviour of the eye: crying, staring, winking, spying… The interior, the hidden and even the pre-human and cannibalistic is exposed in this intense, almost obsessive inquiry into dance, and into the ineffable itself.

Mette Edvardsen — We to be

Mette Edvardsen is drastically expanding the classical stage. She is performing We to be at three locations simultaneously: in the book from which she reads aloud, on the empty stage as a projection screen of your imagination, and in the ether as a live radio broadcast. This production is the final instalment in Edvardsen’s trilogy in which language and voice predominate and visual aspects are transferred to the imaginations of the audience. In the first part, Black, she made invisible objects appear simply by naming them. In No Title, she did the inverse, by indicating what was not there.

Vera Tussing — The Palm of Your Hand II

In 2015, Vera Tussing created the production The Palm of Your Hand, in which social behaviour and classical choreographic patterns were brought very close to the viewers, or rather, participants. Vera is now adapting the production specifically to make it accessible to the blind or visually impaired. To this end, she is making the choreography communicate beyond the merely visible. Continuous interaction between the performers and audience is rooted in an implicit understanding. Along with your fellow audience members, you delineate the stage in an ellipsis: this is a dance of touch. Join the performers in this adventure to discover what it means to experience tactility!

How can a mental choreography give you a sense of movement? In Anatomie, Anne Juren creates a movement score for entrails and bodily functions. While you lie on a mat with your eyes closed, she uses her voice to guide you around your body and your mind. To research this ‘dance’, Juren worked on blind spots, collaborating with visually impaired people. Their experiences became the material to create a choreography that takes place in your body.

Shaking hands, giving high fives, leaning on someone’s shoulder: in The Palm of Your Hand the dancers try to make contact with you. From touch to connectivity to circle games: Vera Tussing takes the kids on an adventure – after two evenings of performing for adults.

What you need to know